Contour lines depict elevation and relief on a map. Actually, you might call these lines "contour circles" because each such line is simply a closed loop that runs along a fixed elevation.

To Illustrate the Point

Another Way to Illustrate the Point

The three circular lines you imagined drawing around the lake’s receding shoreline are essentially contour lines—closed loops running along a fixed elevation.

The spacing of the lines allows you to visualize changes in elevation and relief between them. Closely spaced contour lines show steep changes, whereas widely spaced lines show gradual changes.

The following picture is a section of a well-worn USGS topo map, showing a part of North Carolina’s Shining Rock Quadrangle, a quite mountainous area.

Notice that a hilltop is represented by a small, often irregular-shaped circle. That circle represents the amount of ground you'd see if flood waters were to rise to the elevation of the hill's highest contour line.

As seen in the picture below, each fifth contour line is called an Index Contour, and is heavier, or more bold, than other contour lines, which are called Intermediate Contours. Notice,for example, the 5800-foot contour line on the hill called Shining Rock. 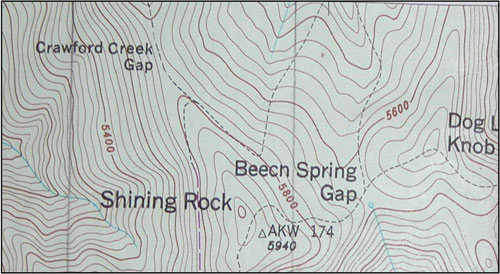 As you cross the terrain, contour lines can help you make better navigation decisions. All things being equal, it's usually better, for example, to "contour" around a hill than to go over it, and then descend again. The best route between two points, then, is not always the shortest.

Using contour lines helps you match up the terrain you see around you with what's shown on your map. Let's say, for example, you're on a ridge that slopes to the southeast. To help locate your position on the map, read the map's contour lines. Is there in your general area a ridge sloping to the southeast? Let's say there is, and further let's say there's only one. Congratulations! You've just identified the ridge you're on. While you may not have pinpointed your exact position, at least you know your general location. And many times, that's all you need to know.

Return from Contour Lines to Home