Magnetic declination is simply the angular difference between True North and Magnetic North.

Strictly speaking, a compass needle doesn't "point" at all. It merely aligns itself with the Earth's weird and wavy lines of magnetic forces that cover the planet. This alignment causes the needle to appear to be pointing somewhere. "To Magnetic North" some people might say.

Loosely speaking these people are right, because the Earth's magnetic  lines do lead, often indirectly, to the Magnetic North Pole.

For ease of communication, we'll talk about the compass pointing to Magnetic North, but we know what we really mean.

The angular difference between True North and Magnetic North is called magnetic declination by those of us on terra firma. Mariners, however, who also insist on calling left "port" and right "starboard" call this difference variation. It's a distinction without a difference, because it's the same thing by either name.

If your compass needle points to the west of True North, you're in an area of west declination.

If your needle points to the east of True North, you're in an area of east declination.

If your compass needle points directly to True North, your magnetic declination is zero.

To find the declination in your area, look in the margins of your topo map. There, you should find an illustration showing three lines: 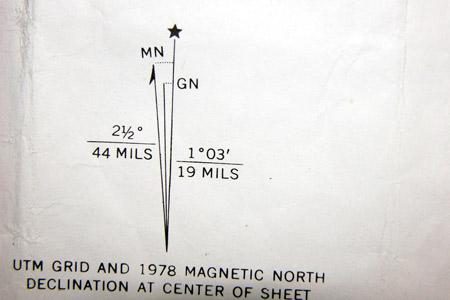 Notice that each tipped with a different symbol:

When using a topo map with UTM grid lines, the most accurate declination for navigation purposes will be that found between Grid North and Magnetic North, called the Grid-Magnetic (G-M) angle.

Please be aware that declination isn't fixed but there are changes in magnetic declination, over time. You'll want to know what these changes are.

You can, if you wish, simply ignore the whole Grid North issue and use the angle between True North and Magnetic North as your working declination. This is true even if you're using the UTM grid lines on your map for direction purposes. The difference between Grid North and True North is so small (no more than three degrees--maximum) it's insignificant for most recreational land navigation purposes.

Declination - A simple concept that can confuse you.

Declination isn't complicated at all, but when you're out in the field, putting it into use can sometimes get confusing. To help make things as simple as possible, check out my video below.

Return from Magnetic Declination to Home