How to Plot Map Coordinates

Let's see now how to plot map coordinates using a military protractor. This tool is designed to work with the military’s 1:25,000-scale maps, as well as the 1:50,000 and 1:100,000 maps. In these examples, we’ll be using a “blank map” with a 1:25,000 grid. There are civilian plotters available in other scales, such as 1:24,000. Once you understand the UTM and MGRS grid systems, and know how to use one plotter, you can pretty easily figure out how to use most other plotters.

We’ll plot three targeted points: A, B, and C. In this case, our plotted coordinates will locate our targets within a 10-meter square. Remember, the coordinate itself does not pinpoint the target, but simply describes the southwest corner of the 10-meter square in which the target lies. 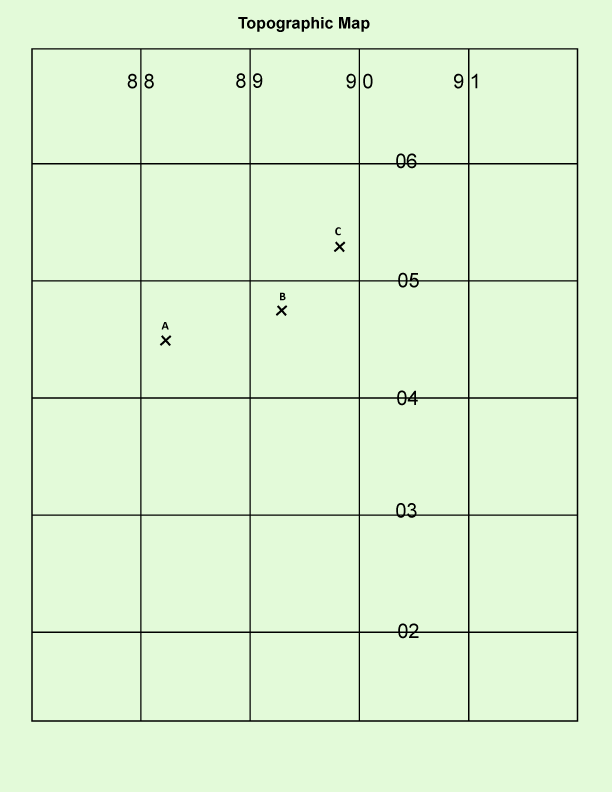 To find the coordinates of any given location, start at the bottom left of the map, and using the map's grid lines, search to the right until you find the closest easting line to the west of your target’s location in this case 88. 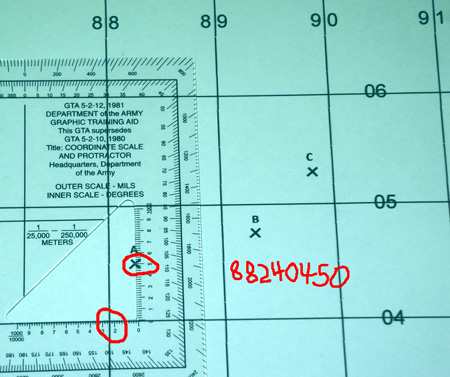 Next, go up that easting line until you come to the closest northing line to the south of your target location, in this case 04. The intersection of these two lines (8804) puts you at the southwest corner of the 1,000 meter square containing your target location. So, now you’ve located your target within a one kilometer square, now use the plotter to locate it within a 10-meter square. To do so, place the horizontal axis of the 1:25,000-scale plotter on the 04 northing line, as shown, moving it until the vertical axis lines up with the targeted X. Reading the plotter, your coordinates are 88240450

Once again, start at the bottom left of the map, and READ RIGHT UP. The closest easting line to the west of your target’s location is 89. The closest northing line to the south of your target is 04. Your target is therefore located in the 1,000-meter square identified as 8904. Using your plotter to locate your target within a 10-meter square, you line up the plotter’s horizontal axis with the 04 northing line. You slide it along that line until the plotter’s vertical axis lines up with the X. Then, read the values indicated on the plotter, in this case 89300478. This coordinate value describes the southwest corner of the 10-meter square in which you’re target is located. 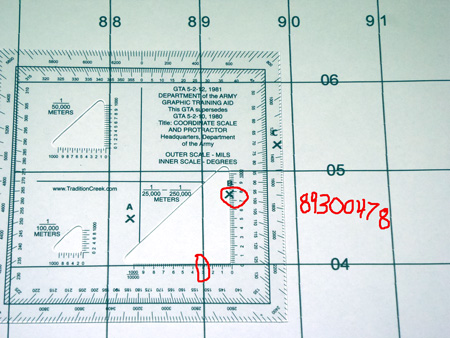 Starting at the bottom left, READ RIGHT UP, and you find that your target is located in the 1,000-meter square identified as 8905. You place the plotter’s horizontal access on the 05 line, and keeping it on that line, you move it until the vertical axis lines up with the X. Reading the plotter, you find that your target lies within the 10-meter square identified as 89820530. 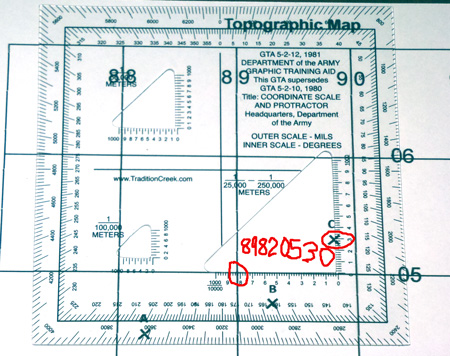 What if you’re only given a number, and you have to plot it? In that case, you essentially do the same thing you did in these last three examples, with one difference. First line up plotter according to the coordinate given, then make your X where it needs to go.

The US Army's publication Map Reading and Land Navigation for more info on plotting and other land nav topics.