How to Use a Compass 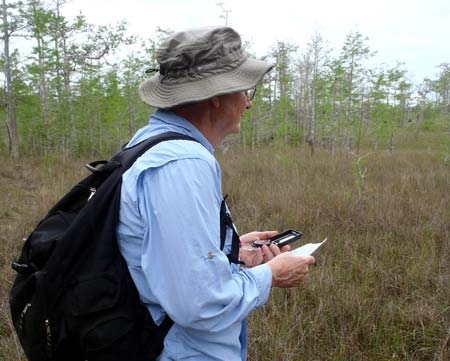 Using a Map and Compass in Florida's Big Cypress Swamp

This section's purpose is to help you learn how to use a compass for effective land navigation. This page sets the stage for you then to go on to learn specifically how to use both the orienteering compass and the lensatic compass. The pages related to the use of those compasses branch off of this page, and are hyperlinked below. But get the stuff down on this page before you leave.

Rather watch and learn than read and learn? In my online video-based land-navigation course, you'll learn to use an orienteering compass and a lensatic compass.

The Purpose of a Compass

The purpose of a compass is to orient you with regard to direction. The main reason you as a land navigator need to learn to use a compass is because we humans have no built-in sense of direction. Some animals may have it, but we two-legged, big-brained creatures are dependent on cues from our surroundings to find our way. Without those cues, it's hard for us to know up from down, much less north from south or east from west.

How a Compass Works

An important cue for us can be the compass needle, which is merely a magnetized piece of metal suspended in some way so it can float freely. Allowed to float freely, a compass needle aligns itself with the earth's magnetic field, making one end of it appear to point to magnetic north.

In most places on the earth there is a difference between magnetic north and true north, that is the direction to the true geographic North Pole. Land navigators call this difference "magnetic declination," which is covered on the page just highlighted. You can't learn how to use a compass effectively without understanding the ins and outs of declination.

Take some time now to visit that page and come to understand this concept thoroughly. Be sure to watch the video about declination. We'll get back together in a few minutes.

Now That You're Back

Now that you're back, let's pick up again by looking at...

With compass in hand, imagine you're at the hub of a gigantic wagon wheel. The rim of this wheel extends all the way to your horizon. From your location at the hub, the spokes go out to the rim in all directions.

There can be as few as four spokes or as many as we'd like to imagine. If there were just four spokes, they'd extend out at right angles to one another to the cardinal directions of North, East, South, and West. To help you remember the order of N, E, S, W -- Just remember "Never Eat Soggie Wheaties."

In times past, mariners imagined 32 spokes going out in as many named directions. Remembering the names of all those directions got involved, and one task of a competent mariner was to be able to "box the compass" by being able to recite from memory all 32 directions.

Today, most compasses make use of 360 spokes, you might say. These 360 different directions are normally numbered 1-360, and are called "degrees." There are 360 degrees in a circle, and our compass has 360 degrees. Most compass dials don't show each and every degree. Some dials may be divided into two-degree increments, while others may be divided into five-degree increments. But there are still 360 degrees, and they indicate cardinal directions, as follows:

The intercardinal directions lie between these four points on the 360-degree dial: 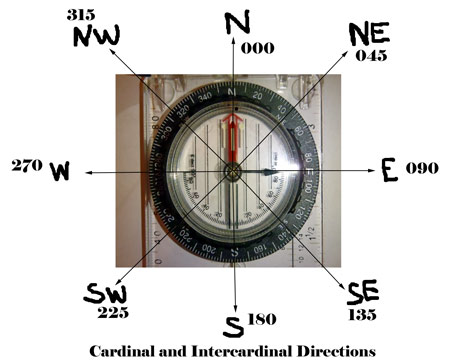 The two most popular types of compasses for land navigation are:

Each type has its advantages and disadvantages. Some people have strong preferences for one over the other. That's okay. But if you want to truly learn how to use a compass, my suggestion is you learn to use both.

Return from How to Use a Compass to Home