Pathfinding simply means making your way from where you are to where you want to go. Your map gives you a bird's-eye view of the terrain, while your compass or some other directional cue helps keep you oriented with regard to direction.

My 10-minute video here introduces this topic, and complements the written information on this page.

But just having a map and maybe a compass doesn't necessarily mean you can get from point A to point B. Doing that involves understanding a few simple techniques for finding your way.

To help you understand the art of pathfinding, I need to introduce its four basic elements:

A baseline is any geographical feature of length, such as a road, river, trail, large shoreline, or railroad track, just to name a few. Baselines can be useful to you--the navigator--because they serve either to restrain your wandering, or help guide you to your destination. 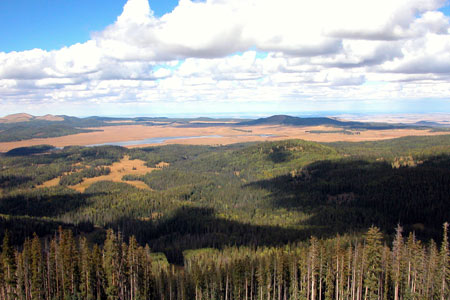 The Distant Shore is a Natural Baseline

Urban areas are loaded with baselines, and people use them all the time to get around. Examples of urban baselines are streets and avenues. Oftentimes, cities are laid out so that streets run north and south, and avenues run east and west. To help you find your way around the city, someone may tell you "follow 13th Street until you come to 39th Avenue, then go left." In this case, 13th Street was your handrail and 39th Avenue was your catching feature until you arrived at it. Then 39th Avenue became your handrail.

Baselines can even be imaginary. A bearing line to a mountain peak is a good example. Let's say you plan to travel north along a forest trail until a certain mountain peak bears 090 degrees. A that point, your navigation plan is to leave the trail, and strike out cross country to the west to find a creek lying in that direction. The 090-bearing line--a totally imaginary feature--is a baseline that serves as your catching feature. At first the mountain is to the northeast of you, but as you proceed farther north up the trail, the mountain eventually bears east, or 090 degrees.

Probably the best known imaginary baselines are the earth's latitude and longitude lines. While land navigators don't use them much, preferring instead the lines of the UTM grid, mariners have used latitude and longitude lines for centuries to help them find their way. Since it's fairly easy to find your latitude with a sextant, there have been many ship's captains who've crossed entire oceans knowing only their latitude, all the while guessing at their longitude. In their case, their latitude line served as a handrail to guide them into a distant port.

With regard to using latitude and longitude lines for land navigation, the late Bradford Angier, famed wilderness writer, describes in his book, The Wilderness Route Finder, how he used a sextant to help him find his way throughout Canada's vast northern wilderness. Following north-south rivers through this vast territory, he would periodically determine his position with a sextant sight for latitude. Since he knew what river he was on, and could determine his latitude with a sextant, he now knew right where he was. An old Navy man taught him to use a sextant, and according to Angier "With this knowledge, the great vastness and complexity of Canada's wilderness began to unfold. It seemed less awesome, less intricate."

Directions refer to the directions of the compass dial.

A checkpoint is any place on the terrain that allows you confidently to identify your location on a map. That could be where two baselines intersect. Or it could even be a prominent turn in a baseline. A hilltop can make a good checkpoint, as long as you can be positive which hill you're on. The main criterion for a checkpoint is that you can easily recognize it from the ground. The map provides a bird's-eye view of the terrain. You, the navigator, must be able to take that bird's-eye view, interpret the terrain around you, and relate it back to the map.

Finding your way from one baseline to the next is the essence of pathfinding. But simply finding your way to a baseline is seldom sufficient. Usually, you must also make your way to some specific point along that baseline--maybe your next checkpoint, or even your final destination.

Other Things to Know about Pathfinding

Sometimes, despite your best pathfinding efforts, you'll get "lost." Well, if you're actually navigating, you won't be truly lost,  but as Daniel Boone once said just "bewildered." To find yourself again means you'll need to study your map and the terrain until you can once again match up the two. Navigators call this "relocation." If all else fails, and you can't relocate, you'll follow a safety bearing back to some prominent baseline in your area. So, although you may not know where you are, you'r not lost in the true sense of the word.

One way to find yourself is to observe prominent features in your area and determine your position in relation to theirs. This is called "resection" and is an indispensable navigation skill.

All the above information involves terrain association--relating the map to the terrain, and the terrain to the map. There are times when you can't do that. Maybe you're in dense forest and can't see anything around you but trees. Or maybe you're in a blizzard trying to make it back to base camp. In those cases terrain association isn't much good.

That's when you'll need to know the ancient pathfinding art of dead reckoning. Information on this topic is contained in the following two pages:

Return from Pathfinding to Home