Resection involves identifying on the terrain at least two mapped features--for example, a mountain top and a radio tower--and determining the direction of each relative to you.

Example: While traveling through mountainous terrain, you recognize two mountain peaks in the distance--Rocky Top and Old Smokey.

Step 1. Using your compass, you determine the bearing to each peak. 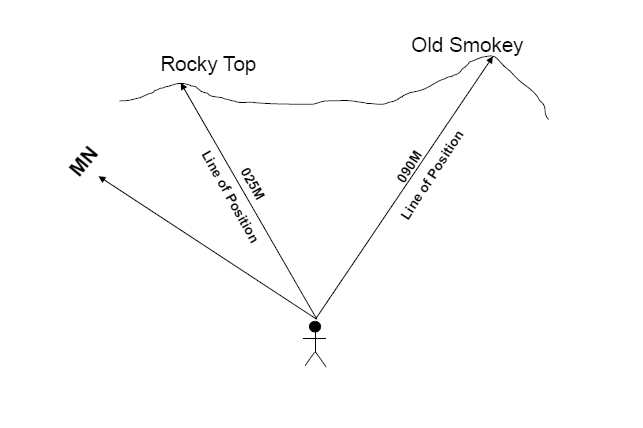 Step 2. Convert the Magnetic bearings in Step 1 to True Bearings. 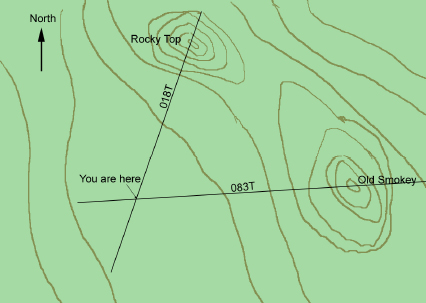 There's only one place on earth where you can see Rocky Top in the distance at 018 degrees and Old Smokey at 083 degrees True. And that's exactly where you are, as shown by the convergence of your two lines.

But that song title reminds me that it only takes two--two lines of position that is, to pinpoint yourself on the map. If it so happens that you're already traveling along a line of position (a road, river, trail, whatever), you can fix your position if you can come up with only one more.

Example: While traveling along the Appalachian Trail in north Georgia, you spot a water tower which you identify on the map as the water tower at Camp Merrill--the U.S. Army Ranger training post. Fix your position as follows:

Step 1. Determine the compass bearing to the water tower, in this case, we'll say it's 195 degrees.

Step 2. Convert your Magnetic bearing to a True bearing. Since the declination in this part of the world is 005 degrees West, the True bearing to the water tower is 190 degrees.

Step 3. On your map, draw a 190 degree line through the water tower. You're located where that line crosses the Appalachian Trail. 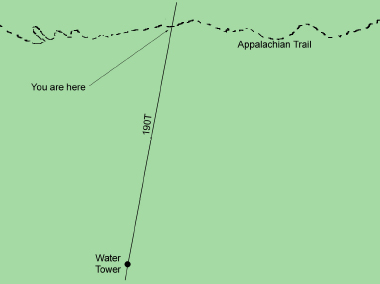 Return from Resection to Pathfinding

Return from Resection to Home