Directions by
the Full Moon 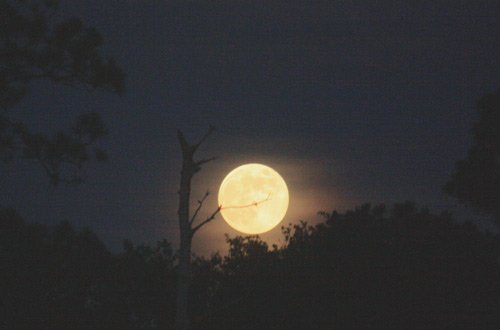 The moon is full only one day each month. At this time, it rises in an easterly direction (which can vary quite a bit) at about sunset, crosses your meridian (that is, it bears 180 degrees True in the Northern Hemisphere or 360 degrees True in the Southern Hemisphere) at solar midnight (12 hours past Local Apparent Noon), and sets in a westerly direction (which can also vary quite a bit) around sunrise.

Things are turned around in the Southern Hemisphere where the full moon still rises in an easterly direction and sets in a westerly direction, but instead of arcing across the southern sky, it arcs across the northern sky (as does the sun), crossing due North at solar midnight.

If the moon's altitude with respect to the horizon is substantially greater than 45 degrees at solar midnight, you can still rely on the fact the the full moon rises in at least a somewhat easterly direction, crosses your meridian (bears 180 degrees in the Northern Hemisphere, or 000 degrees in the Southern Hemisphere) at solar midnight , and sets in an least a somewhat westerly direction. What you can't do is use the "high-flying" moon's position at other times of the night to accurately project a bearing down to the horizon. The reason for this is that when the moon is too high in the sky its 15-degree-per-hour travel across the sky does not sufficiently correlate to its bearing change, as that bearing is projected down to the horizon.

Directions by a Near Full Moon

Of course, the big trick here is determining how many days you are away from a full moon. With some observation and practice, you might get pretty good at guessing. While these directions might not be accurate to within 20 degrees, you can still determine a general direction in which to proceed to a baseline.

If the near-full waxing or waning moon rises no higher than 45 degrees on any given night, you can use it as a compass, provided you have a timepiece.

Return from Full Moon to Home