Information related to Orienteering for beginners normally includes how to play the game, as well as how orienteers actually navigate. 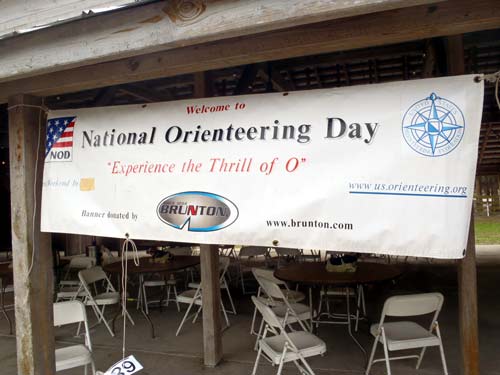 How to Play the Game

The game can be played in any number of ways, but the most common way calls for players to locate a certain number of control points (CPs or "controls") along a prescribed course. Each control must be visited in order. When arriving at the control, you normally use a hole punch hanging at the control to punch a "ticket" to prove you actually found the control. 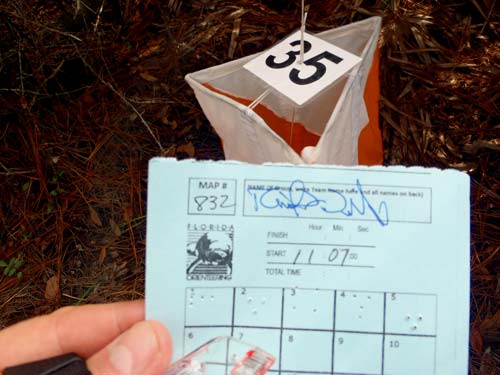 Here's a control "kite" as they're called.
It's an orange and white piece of cloth to which is hung
a hole punch used to punch your "ticket."

In lieu of hole punches, nowadays electronic "punches" are increasingly common. These punches are like electronic "keys" that you insert into a "keyhole" at the control to register that you've actually been there. You turn in your "ticket" or your "key" at the end of the race. 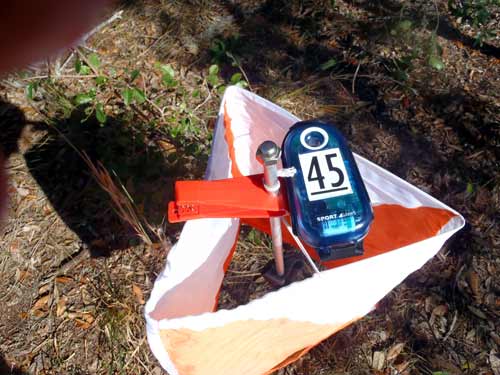 Players' starts are staggered by several minutes so that players are not running in a group. (Although players can form teams and run together as a team.) Each event normally has several courses, and even though two courses may share certain controls in common, they don't share them all. You'd never want to follow anyone because not only is it against the rules, you can't be sure which course they're on. So, you ignore what others are doing, and just run and navigate to the best of your ability. Of course, no rule says you have to run. You can walk or even crawl if you want to. But NO GPS allowed! Maps and compasses only.

Another type of Orienteering is "Score Orienteering," or "Score-O" for short. The object of this game is to find as many controls as you can in an allotted time. The more distant or hard-to-locate controls are usually worth more points. You can find them in any order you wish.

The Game is Limited Only by Imagination

The game of Orienteering is limited only by imagination. You can play it on foot, on horseback, on skis, on mountain bike, in a canoe, or even underwater (SCUBA divers need to know navigation too.) You can play it day or night. The courses can be short, or they can be long endurance races. The game can be played in wilderness or in urban areas. The idea is to create a fun and exciting challenge.

Are you an outdoors type who values developing your wilderness skills? If so, you'll want to know how to navigate cross country.

There's probably no better way to develop that skill than to get good at the game of Orienteering. Orienteers, not only want to get from point A to point B, they want to get there as fast as possible. Good players therefore don't have a lot of time for fancy-dancy compass work. They don't "shoot azimuths" and they don't draw lines on maps. Not usually, anyway. 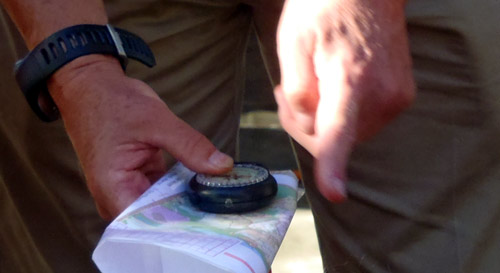 Instead, they normally use a plain and simple compass to orient their map to the terrain, then deduce which way to go simply by comparing the map to the terrain. Instead of following an azimuth of, we'll say 227 degrees, for instance, they simply go "that-a-way" as shown by the map. Of course, keeping your map oriented assures that you're following the right course. 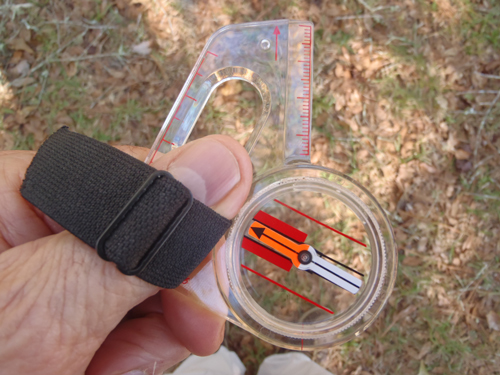 An Orienteering Thumb Compass.
No need for degrees. You Just Need to Know Which Way to Go.

I use my Orienteering thumb compass, for example, mostly for orienting the map. The compass doesn't even have degrees marked on the dial. It does, however, have a marked North Box, so I can follow the compass alone, without having to constantly hold it next to the map. Some thumb compasses don't even have this feature because some orienteers don't care to use it. For them, the simpler the better.

Now, that's different from any land navigation I had ever done in the past. But strangely enough, Orienteering navigation works fast and works well. The sport helps you gain navigation proficiency quickly. If you don't understand what to do, there are usually plenty of helpful people at an event you can ask.

While traveling, players periodically reorient their map, normally with a compass, but they also use terrain association, or sometimes maybe even the sun's position. An oriented map is all important because it shows which way to go. It's not by accident they call the sport "orienteering."

If you're a military member used to dealing with MGRS coordinates and carefully shooting azimuths with a lensatic compass, my guess is Orienteering will blow your mind. You'll have to learn to alter your skill set, but the new way of doing things will only enhance your navigation skill. Keep in mind, this whole sport started out in Sweden over 100 years ago as military training. Your military training is still valuable, but a proficiency in this sport adds even more value to it.

The same goes for Search and Rescue personnel, wilderness medical folks, and those who just love spending time in the backcountry. You need a proficiency in land navigation, and Orienteering can help you develop or enhance that proficiency.

So, grab your compass and your shoes and find an O-club near you.

If you're in the USA, and want more information on Orienteering for beginners, here's a good place to start:

Outside the USA, check the search engines for a club in your area.

Return from Orienteering for Beginners to Home