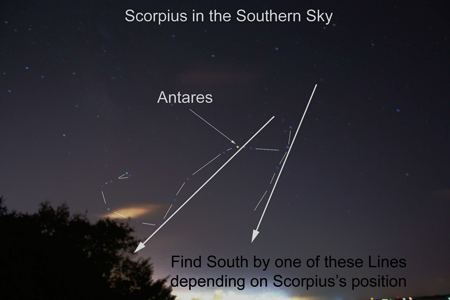 The Scorpius constellation is visible during the Northern Hemisphere's summer, which is the Southern Hemisphere's winter. The constellation's main star is Antares, a red giant that circles the earth at a latitude of around 26 degrees South. This means at that latitude Antares passes straight overhead. The farther north you are of that latitude, the lower Scorpius is in the sky. The same is true the farther south you are of that latitude.

The mythology serves to help us remember the order of the night skies. It is said that Scorpius is chasing Orion, whom he will never catch since Orion is setting at about the time Scorpius is rising. As long as your feet are planted firmly on Earth, you'll never see fully Orion and Scorpius at the same time.

Scorpius's Place in the Sky

Unlike some other constellations that don't readily appear like anything they're supposed to represent, Scorpius at least looks somewhat like a giant celestial scorpion. At its neck is the red giant star, Antares. Some people say Scorpius looks like a fishhook.

Like Orion, which rises on his back and sets on his stomach, Scorpius also shifts position as the night progresses. To find south by Scorpius, observe the constellation's position.

These imaginary lines may not intersect with the horizon at exactly due south, buy they'll be plenty close enough to help you find your way to a lengthy baseline.

Return from Scorpius Constellation to Home