How the UTM Grid Works

The UTM grid is designed primarily for local land navigation. Global travelers--e.g. aviators and mariners--will find it less than useful for their purposes. But for land navigation--usually limited to a relatively small area--the UTM grid is just the thing because it divides the territory into neat little squares, making pinpointing your position a snap. The lat/long grid, on the other hand, is more cumbersome because those pesky, converging longitude lines make plotting your position more cumbersome.

The UTM grid starts by dividing the earth into sixty zones, each six degrees of longitude wide. Each zone runs from the north pole to the south pole.

Pictured below is the earth, with longitude lines drawn in a selected section. Highlighted in green is one single UTM zone. 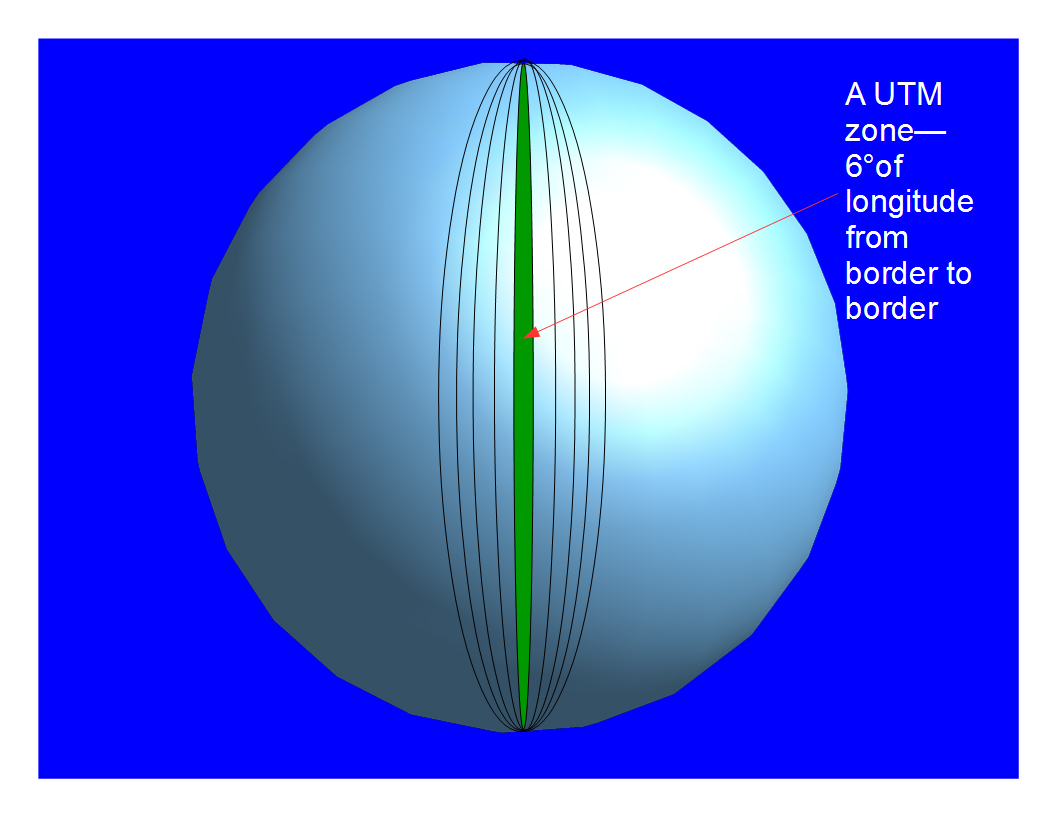 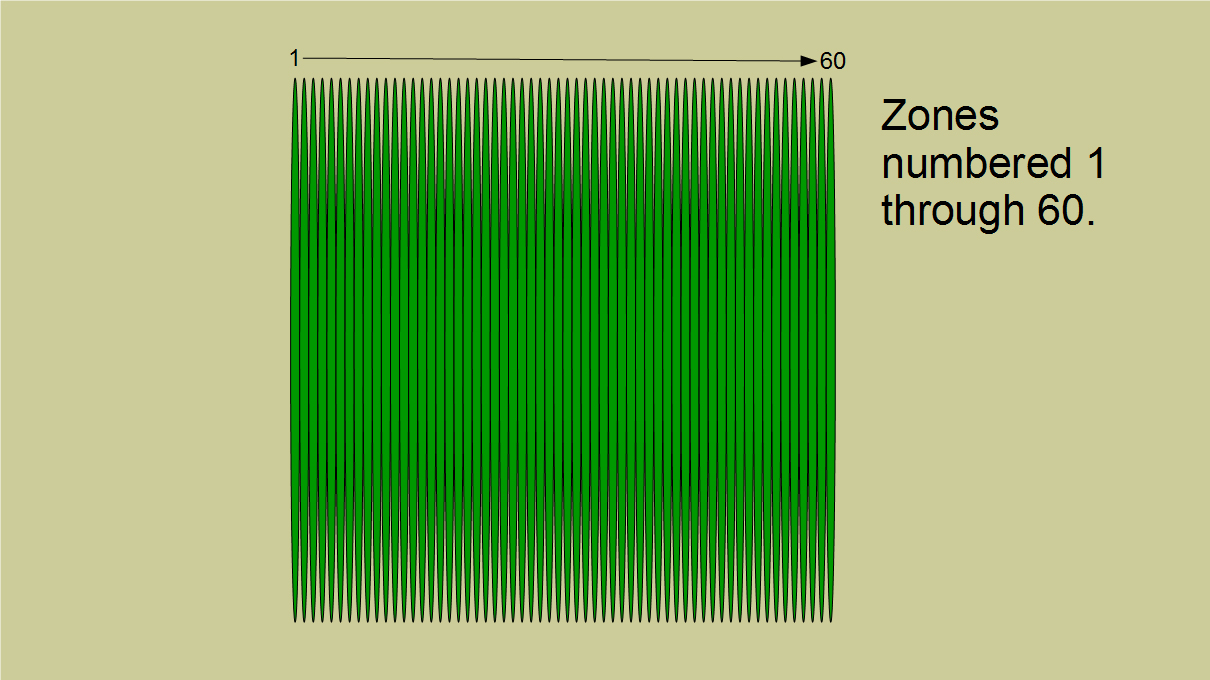 How Zones Are Divided 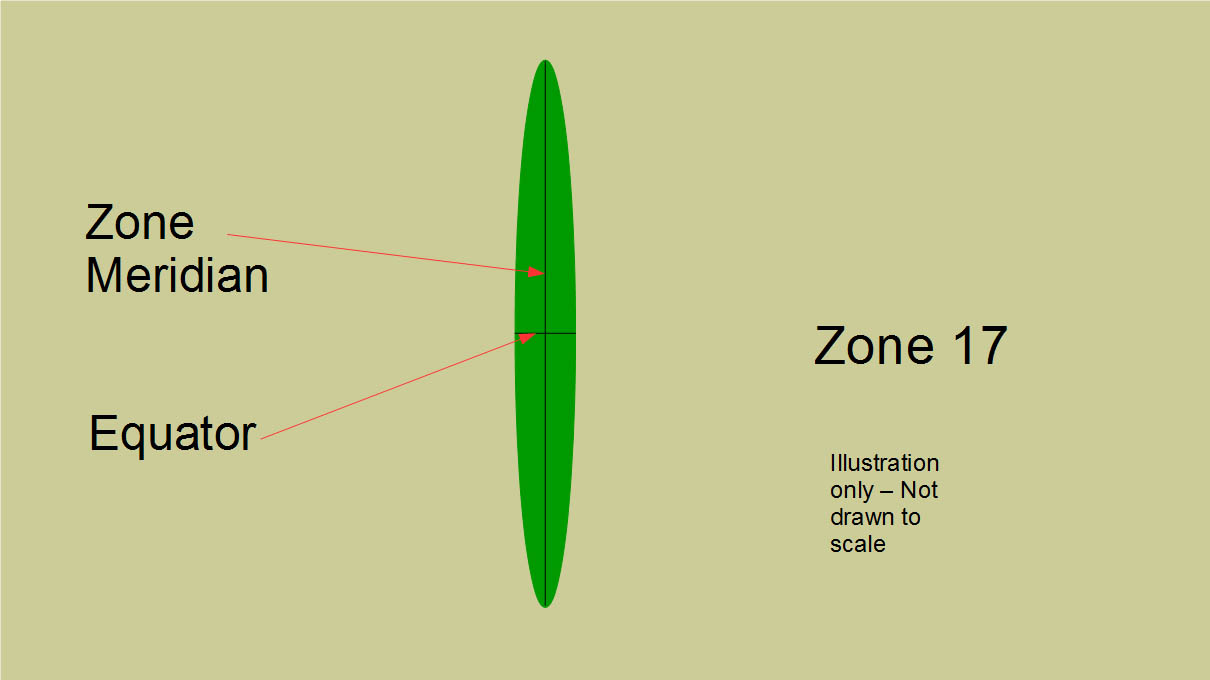 Each zone is overlaid with a grid 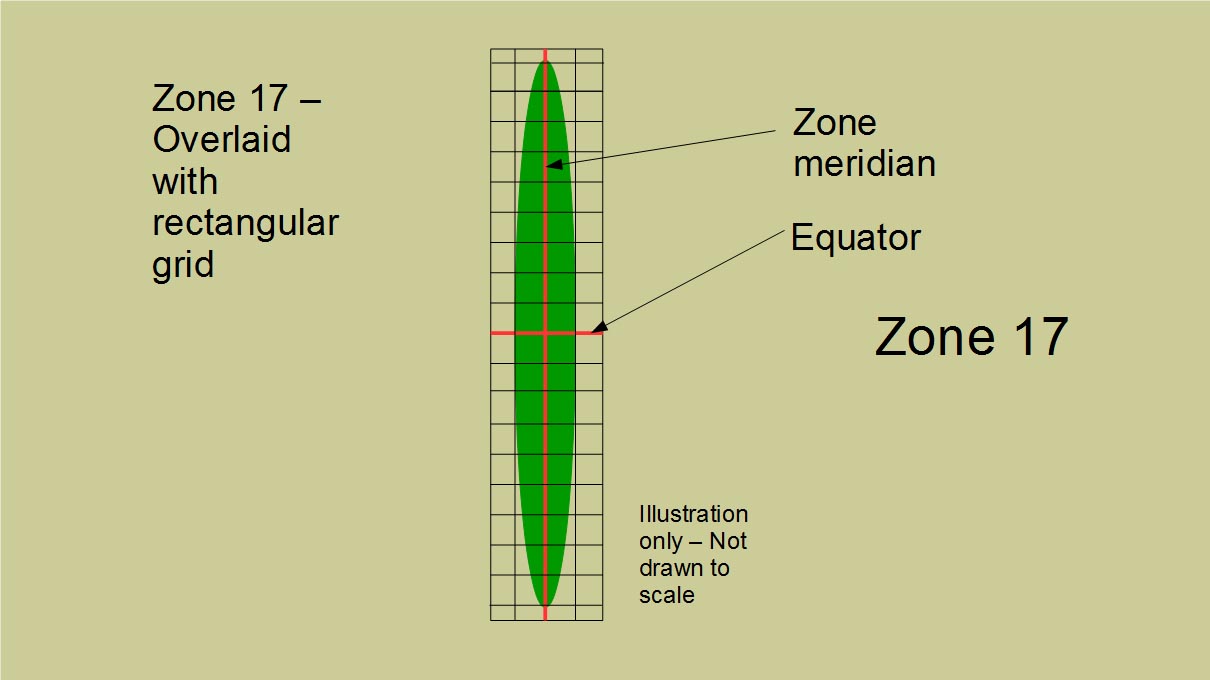 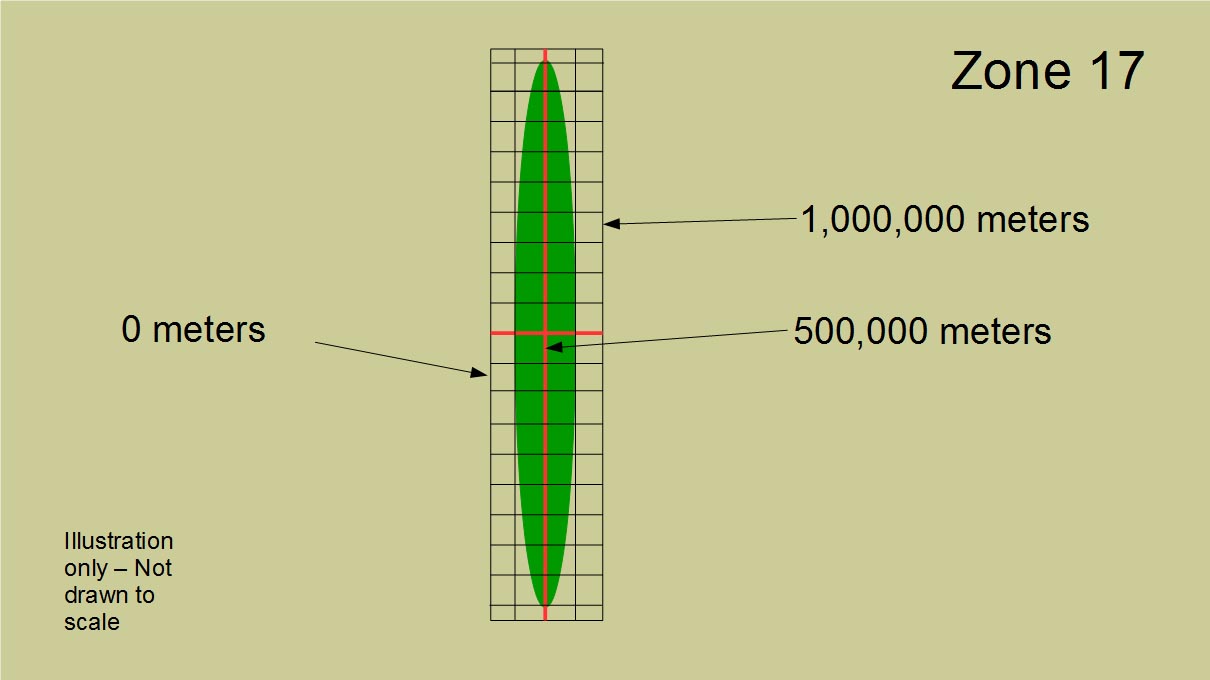 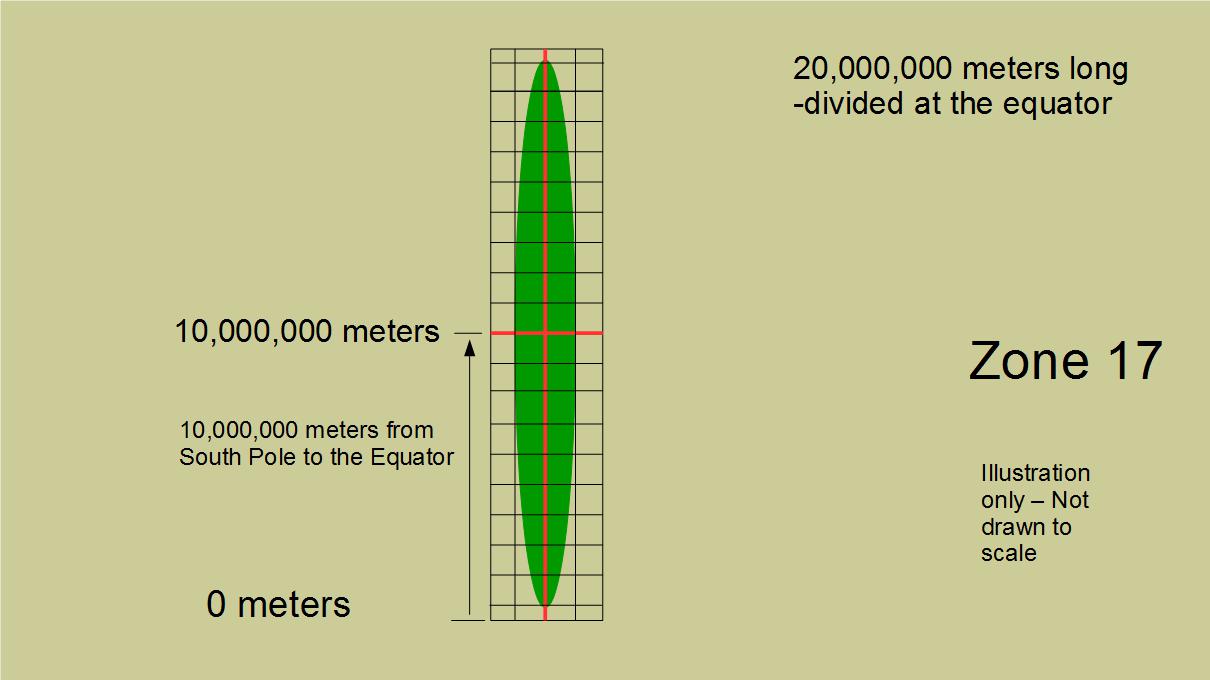 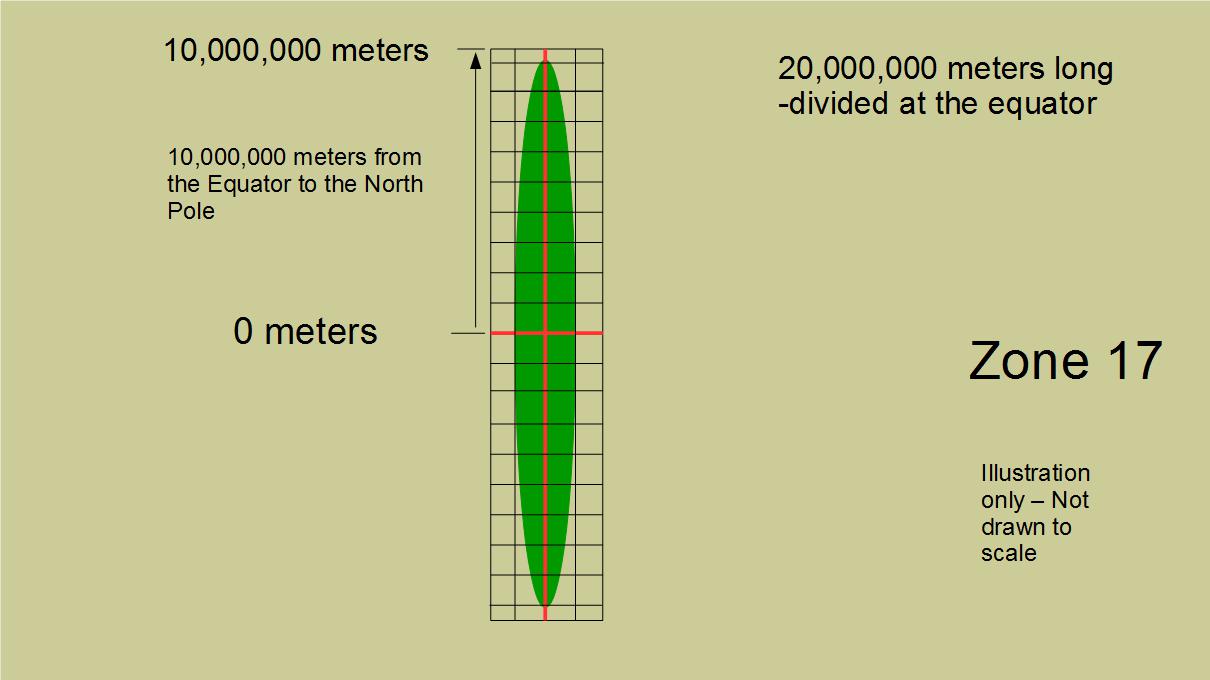 Even though we've talked about the grid running from pole to pole, the UTM grid is not used below 80 degrees south latitude, or above 84 degrees north latitude. Beyond those latitudes, distortion would be too great. Therefore, a completely different grid is used in those areas. It's called the Universal Polar Stereographic (UPS) grid. 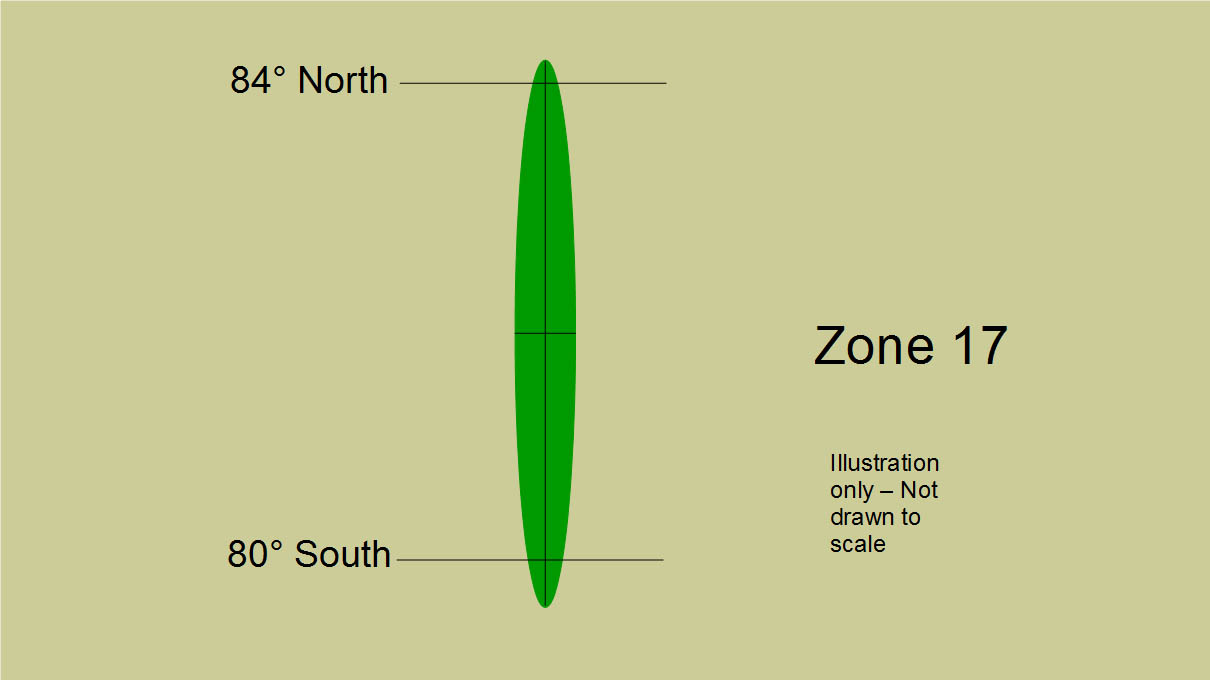 The UTM system is designed so that there is never any need for negative numbers. All grid values are positive, no matter which hemisphere you're in.

In the southern hemisphere, the minimum valid northing is 1,110,400.

And in the northern hemisphere, the maximum valid northing is 9,334,080.

Each UTM zone is divided horizontally by quadrants. Quadrants are labeled C, starting at 80 degrees South, and run all the way through X, ending at 84 degrees North. I and O are omitted since they could be confused with a 1 and a 0.

It just so happens that the first quadrant north of the equator is N. That happy coincidence is a good way to help you remember which hemisphere you're dealing with. If the quadrant is N or subsequent to it, you're in the northern hemisphere. Anything before N describes the southern hemisphere. 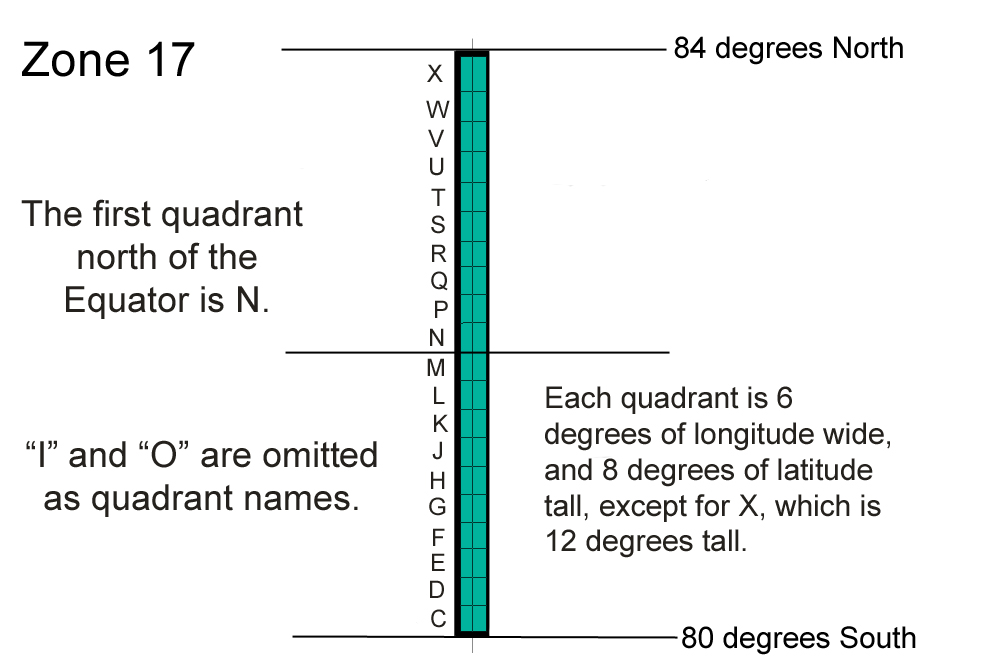 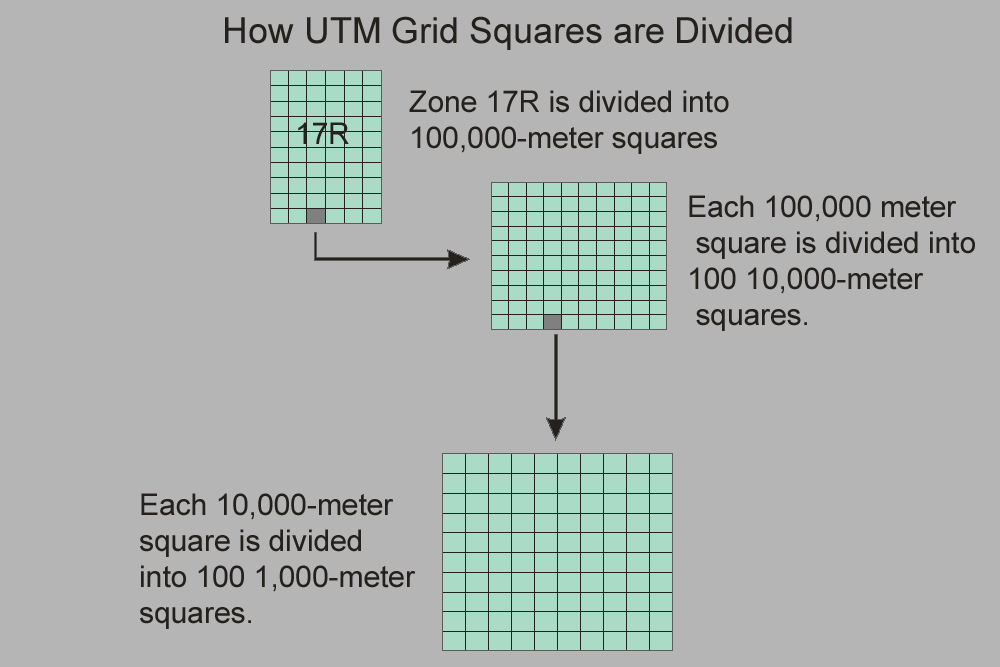 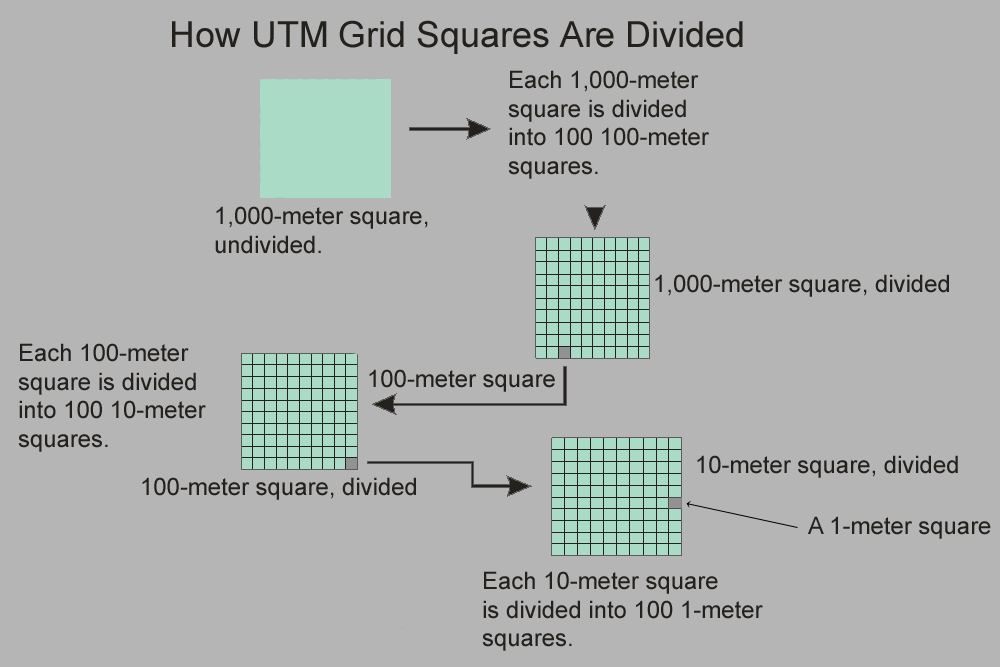 Grid coordinates are formed by the intersection of eastings and northings.

Eastings are grid lines running north and south. The values assigned to eastings depend on their distance in meters--east or west--from the zone meridian.

Northings are grid lines running east and west. The values assigned to northings depend on their distance--north or south--from the equator.

The values assigned to eastings and northings are called false values because they are not based on anything universally scientific, but were selected for convenience sake to avoid having ever to use negative numbers or the directional notations of north, south, east, or west.

When stating UTM coordinates, the easting is ALWAYS stated first, followed by the northing.

A UTM coordinate does not describe a specific point on the earth's surface, as does a lat/long coordinate, but instead describes the southwest corner of a specified square. The size of that square depends on the resolution of the coordinate. Coordinate resolutions can can vary from 100,000 meters square, down to a single square meter.

The coordinate includes the zone number, the quadrant, then the numbers defining the square in question.

Here, for example, is an example of a very high-resolution coordinate, describing a single square meter on the earth's surface.

This single square meter is located in zone 17, quadrant R.

Since the grid that overlays each zone is 1,000,000 meters wide, the zone meridian is assigned a value of 500,000 meters east. East of what? East of nothing. Don't worry about it. Just say "meters east."

Any easting value less than 500,000 meters east describes a location west of the zone meridian.

Any easting value greater than 500,000 meters east describes an area east of the zone meridian.

Notice that easting values ALWAYS increase as you go east.

The easting of our UTM coordinate tells us that the southwest corner of our specified one-meter square is located 20,608 (500,000 minus 479,392) meters west of the zone meridian.

Northings describe how far a specified square is from the equator.

Notice that no matter which hemisphere you're in, northing values ALWAYS increase as you go north.

So, the northing of our UTM coordinate above tells us that the southwest corner of our specified one-meter square is located 2,982,319 meters north of the equator.

The southwest corner of our one-meter square, then,  is located in Zone 17, Quadrant R, 20,608 meters west of the zone meridian, and 2,982319 meters north of the equator. That's pretty darned specific.

Full UTM coordinates can be rather cumbersome, so many people just abbreviate them by leaving off the zone and the quadrant, since those involved already know what these are. Then, they sometimes add a leading zero to the easting value to give it seven digits to match the seven-digit northing value. Here's our UTM coordinate abbreviated:

Since eastings ALWAYS come first, there's no need to state which is easting and which is northing.

The 04 of the easting and the 29 of the northing define the southwest corner of a 100,000-meter square. Since most ground-based operations are confined to a single 100,000-meter square, these numbers are often omitted, along with the zone and quadrant. After such abbreviation, our coordinate, describing a one-meter square, would look like this:

The southwest corner of a 10-meter square would leave off the last number (the unit's place) of the easting and the northing, and would look like this:

Notice, I didn't round the 1 in the northing to a 2. The reason? UTM uses truncation, not rounding, when abbreviating coordinates.

Many times in land navigation, we don't have to be highly specific. If we can just get within hootin' and hollerin' distance, we're good. For this reason, coordinate resolution is often given in 100-meter squares. To do truncate the coordinate, just leave off the ten's place, like this:

Of course, if you want to define the southwest corner of a 1,000-meter square, the coordinate value would look like this:

The description of the southwest corner of a 10,000-meter square would look like this:

Eastings and northings can be run together to form one long string of numbers. Here, for example is the coordinate describing a 100-meter square:

You just have to know where the separation from easting to northing falls. To help eliminate any confusion, some people use coordinates like this:

Many USGS topographical maps have the UTM grid drawn in. Some don't. They just have the UTM tic marks. When that's the case, you need to draw the grid yourself.

Below is a representation of a topo map, showing the eastings labeled. The westernmost easting in this case is 416,000 meters east. Many eastings are abbreviated, leaving off the last three numbers--those indicating units, tens, and hundreds--and including only the numbers indicating thousands, ten thousands, and hundred thousands. The thousand counters (17 thousand, 18 thousand, 19 thousand, and so  on) are shown as big numbers to make them stand out. 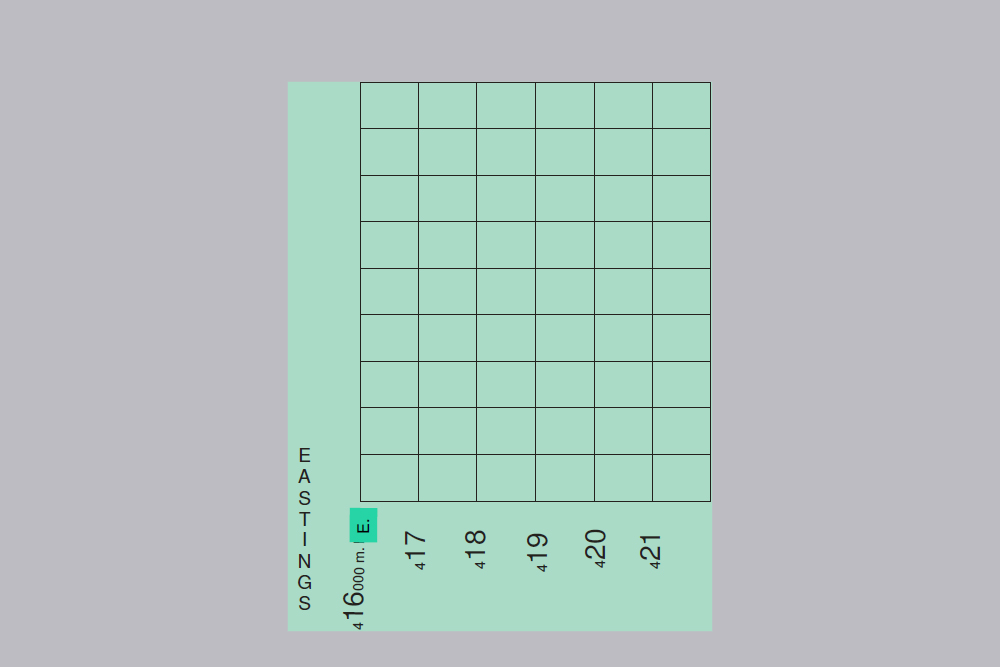 Northings work the same way. The full northing is usually stated somewhere on the map, but most northing values are abbreviated. Northing grid lines, like easting grid lines, span 1,000 meters on the map's scale. 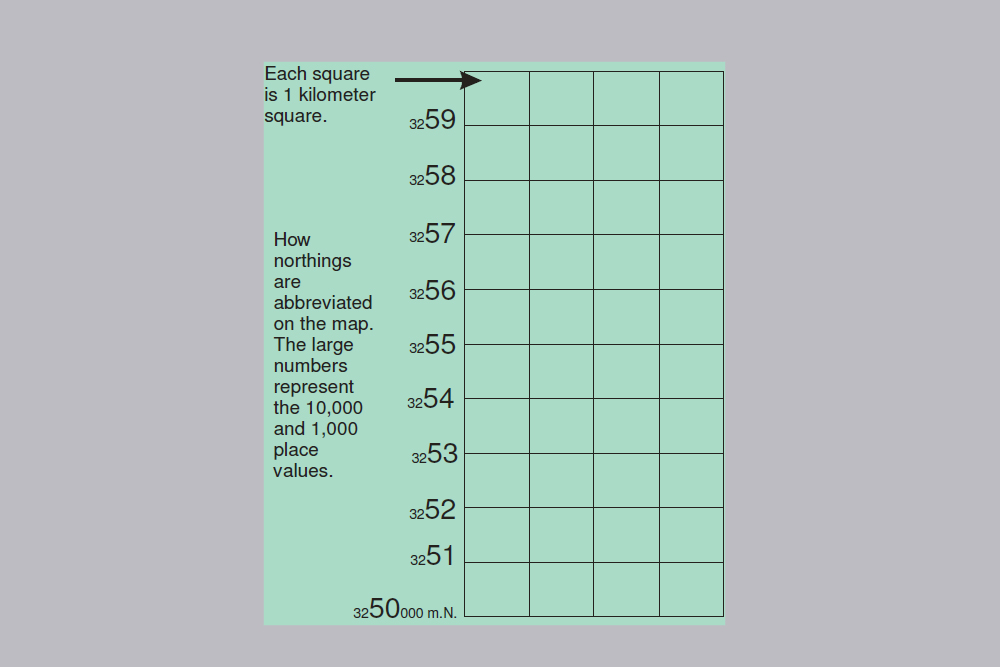 To find the coordinates of any given location, start at the bottom left of the map, and using the map's grid lines, search to the right until you find the closest easting line to the west of your target location.

Next, go up that easting line until you come to the closest northing line to the south of your target location. 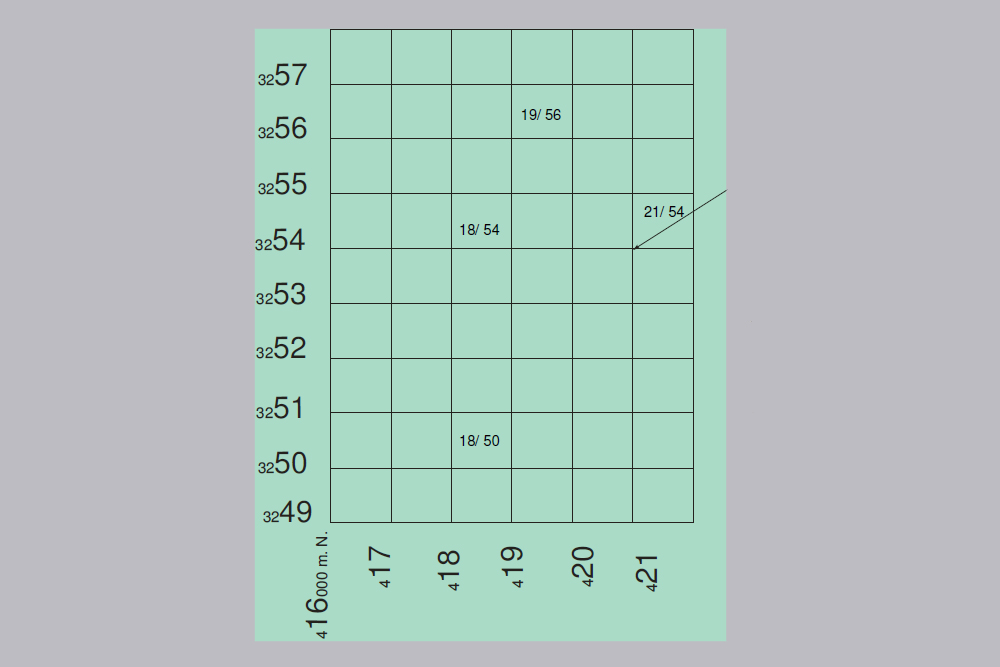 Now, let's say the coordinate you want to plot is 203/531. Since this is a 6-digit coordinate, it describes the southwest corner of a 100-meter square, as pictured in gray below. While the USGS topo maps don't divide 1,000-meter squares into 100-meter squares, as shown, there are special map tools you can overlay the square to do this. In the absence of such a tool, the trick is to "eybeball" the map, make a good guess where the 3 in the easting, and the 1 in the northing are located, then just plot that point. It's not pinpoint precision, but it's usually good enough. 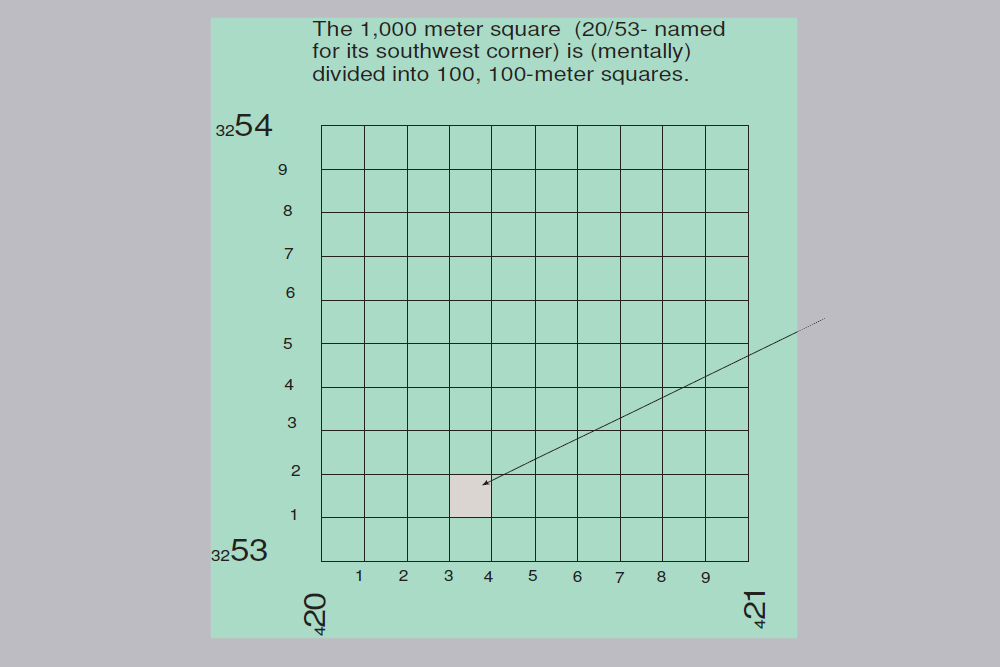 For a plotting accuracy greater than 100 meters, you'll need to use a special map tool for that purpose.

Return from How the UTM Grid Works to The UTM Grid

Return from How the UTM Grid Works to Home