Directions by
the Waxing Moon

What Lights the Moon?

Owing to its position relative to the sun, a waxing moon is lit by the sun to its west, whether the sun is visible in the sky or has disappeared over the western horizon. 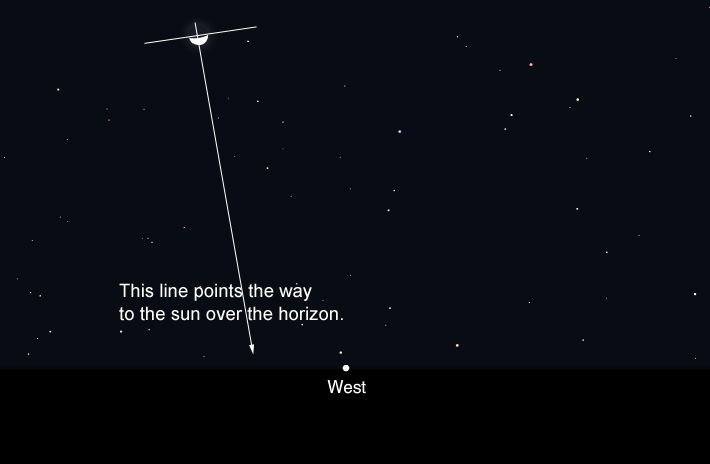 The important thing to remember is that the sun over the western horizon is what's lighting the waxing moon in the night sky. At this time you can't see the sun, but the sunlit moon effectively "points" the way to where the sun is.

Where Did the Sun Set?

To find the approximate direction of sunset, in your mind's eye, draw a line between the horns of the "newish" moon. Then draw a second line perpendicular to the first, and down to the horizon. This second line points to the sun over the horizon, and gives a close-enough, but not necessarily exact, indication of where the sun went down. (See screenshot above.)

Knowing approximately where the sun went down, combined with the sunset's bearing (be sure to read the pages on navigating by the sun, found on the Celestial Navigation page) orients you with regard to direction.

The above statements are true regardless of which hemisphere you're in.

As explained on the pages dealing with solar navigation (the list of which is hyperlinked just above), exactly how far north or south of west the sun sets depends on the date and your latitude.

You can use this same method to find the approximate direction of sunset even as the moon continues to wax, even up to and including the "half-moon" (first-quarter) phase. To find the approximate direction of sunset from the half moon, draw a line in your mind's eye across the moon's flat side. Then draw a second imaginary line perpendicular to the first, and down to the horizon, just like you did with the new to "newish" moon.

After the moon is past its "half-moon" (i.e. first-quarter) phase, this method becomes less precise, but you can still reckon rough directions by knowing that the waxing or "growing" side of the moon is on the moon's easterly side, and the moon's already filled-in side indicates a westerly direction, as shown in the screenshot below. This is true in both of the earth's hemispheres. The screenshot below shows a Northern Hemisphere moon. West is to the right because you're looking in a southerly direction to the moon. In the Southern Hemisphere, you'd be looking at the moon in a northerly direction, so west would be on the left. 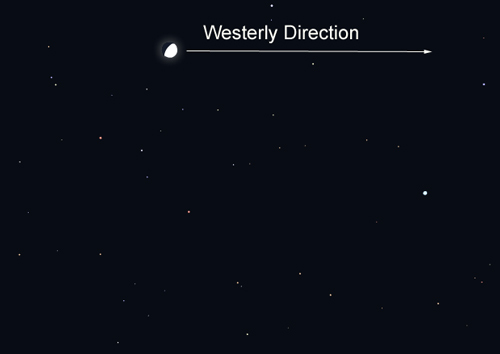 Directions by a Gibbous Moon
A Gibbous Moon is past the "half-moon"
or first-quarter phase, and not yet full.
Image Courtesy of Neave Planetarium

If the moon is down low on the horizon, the the already-filled-in side points downward to the sun over the western horizon. 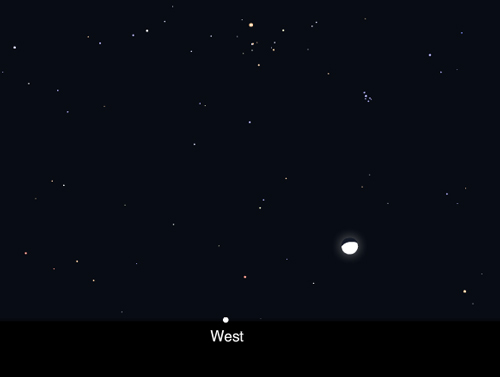 Return from Waxing Moon to Home